On February 22, departed the great traveler and kayaker, who sailed three times The Atlantic paddling in a kayak, alone and without outside help. He was a volcanoe of energy with his accomplishments pushing the boundaries of the impossible. Olo died in Tanzania while conquering Africa’s highest peak, Kilimanjaro fulfilling another travel dream.

We extend our deep sympathy to Olo’s family.

To watch the stream, simply visit our homepage at explorers.org, our YouTube channel, or live on our Facebook page – Thursday, January 21 at 3:00 pm ET (21:00 in Poland)

Mariusz Ziółkowski FI’02 is a Professor of Archaeology of the Americas at the University of Warsaw, Poland. He is also the Director of the Center for Andean Studies of the University of Warsaw in Cusco, and Extraordinary Professor at the Universidad Católica Santa María de Arequipa, Peru.
Ziółkowski specializes in Inca archaeology and ethnohistory, absolute dating techniques, archaeoastronomy, and has taken part in archaeological work in Poland, Iraq, Peru, Ecuador, and Bolivia. He was decorated with the Order of Merit, in the rank of Officer, by the Government of the Republic of Peru in 1998.
He is the author of several books, including – “Pachap unancha. The Metropolitan Calendar of the Inca State” (Ediciones El Lector, Arequipa 2015) & “Myths, rituals and politics of the Incas” (with Jan Szemiński – Ediciones El Lector, Arequipa 2018).

The project is part of the Grant Perfect Science – Independence Engraved in DNA. Wacław Sieroszewski – Polish friend at the farthest ends of the world no. DNK / SP / 481115/2020 of the Ministry of Science and Higher Education

Wacław Sieroszewski was a 19th-century Polish exile, who in Yakutia undertook scientific and exploratory activities, the culmination of which was the creation of one of the most important monographs on the life and customs of the Yakut “12 years in the country of the Yakut”.  Currently, he is recognized by this Siberian Nation as a hero who discovered them for the world and contributed to the preservation of their culture, tradition and history. On April 20, 2021 75 years will have passed since the death of this outstanding researcher and independence activist, who, after returning from exile to Russian Siberia, served as both a PM and senator of the Second Polish Republic. In connection with this anniversary, a series of scientific events will be organized, during which the latest results of research on the figure and achievements of W. Sieroszewski will be presented.
The first part of the project will be the Warsaw-Yakutsk online conference on October 20, 2020. The following conference is scheduled for March 2021 and will have an innovative seminar character resulting from its combination with scientific expeditions, the results of which will be presented at the end of the conference.

2021 – the second part of the project will take place in Yakutia.

a/ Polish scientists and researchers in a conference / seminar in Yakutsk will present and remind the figure of Wacław Sieroszewski, then work out a plan to commemorate this extraordinary discoverer.

c/ the third part will end with a seminar presenting the results of the journey, which will be a step towards further scientific cooperation and will contribute to a better mutual perception of both nations Polish and Russian Federation. At the same time, the conference conducted in this way will be an internationally understandable signal of goodwill that science and passion for exploration the world create a universal language that connects across divisions

Part I – The beginning

Exploration of these remote areas, still very rarely visited, is in progress and some Poles are involved in it. Polish Chapter of the Explorers Club congratulates Maciej Besta on his recent achievements in this field. As soon as the epidemic situation allows, we will listen to lectures on his explorations in our Warsaw headquarters. For the moment, with the Author’s consent, we provide a link to his website, where his expeditions and achievements are presented.

Krzysztof Wielicki FI’1997 (Lowell Thomas Award’2001) received Piolet d’Or Carriere – Golden Ice Axe Lifetime Achievement Award, considered the highest honor in mountaineering. Wielicki is a fifth man who climbed all 14 eight-thousanders (The Crown of the Himalayas and Karakoram) and the first who summitted three of them in winter, including Mt Everest. He is still active, he led two winter expeditions to K2, the last unconquered in winter eight-thousander. END_OF_DOCUMENT_TOKEN_TO_BE_REPLACED

An exhibition at the University of Warsaw organized by the Polish Chapter of the Explorers Club.
END_OF_DOCUMENT_TOKEN_TO_BE_REPLACED

On the initiative of the Polish Chapter, on May 28, 2014 at the Castle in Łęczyca, an Agreement was signed on the creation of the Award. The signatories who created the Award Chapter are representatives of the Polish Chapter of the Explorers Club, the City Hall of Łęczyca, the County of Łęczyca and the Warsaw Scientific Society. The prize is awarded annually for outstanding exploration and research achievements on earth, in the sea and in space in the following categories:

1. Grand Award for a Polish citizen,
2. Award for a foreigner distinguished in cooperation with Polish researchers.
The prize aims to promote Polish exploratory achievements and to remind, through the person of the Patron, the historical significance that our country has played in the field of intercultural contacts.

Special Awards are also granted for outstanding achievements in the field of exploration.
The jury has 12 members; its chairman is currently prof. dr hab. Stanisław Rakusa Suszczewski. All Winners become Honorary Members of the Award Chapter.
The seat of the Award Chapter is the Royal Castle in Łęczyca, where usually in February the names of the winners of subsequent editions are announced.

The ceremonies of the first four editions of the Award (2015 – 2018) were held at the Archdiocese of Tum near Łęczyca (more information about the Prize on the website – link), while the fifth edition took place on May 15, 2019 at the Royal Castle in Warsaw.
The ceremony of the 6th edition is planned for June 3rd, 2020 in the auditorium of the Collegium Maius (15th century) of the Jagiellonian University in Kraków (link)

On Saturday, October 10, 2020 at 16:00, in the Collegium Maius of the Jagiellonian University in Krakow, the 6th edition of Benedict the Pole Award ceremony will be held. END_OF_DOCUMENT_TOKEN_TO_BE_REPLACED

The Fifth Ceremony of Benedict the Pole Awards took place in the Concert Hall of the Royal Castle in Warsaw on 15th of May 2019. END_OF_DOCUMENT_TOKEN_TO_BE_REPLACED

“25 years before Marco Polo; Benedict the Pole and Giovanni da Pian del Carpine on the court of the Khan of Mongols, 1245-1247”

END_OF_DOCUMENT_TOKEN_TO_BE_REPLACED 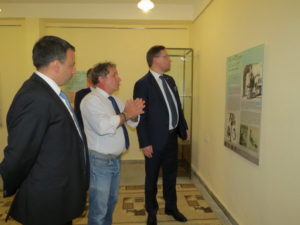 The exhibition “Poles on the Silk Road” was opened in the Museum of Metsamor in Armenia in October 2017,  thanks to the financial support of the Polish Ministry of Science and Higher Education (project no. 943/DUN/2016).
END_OF_DOCUMENT_TOKEN_TO_BE_REPLACED