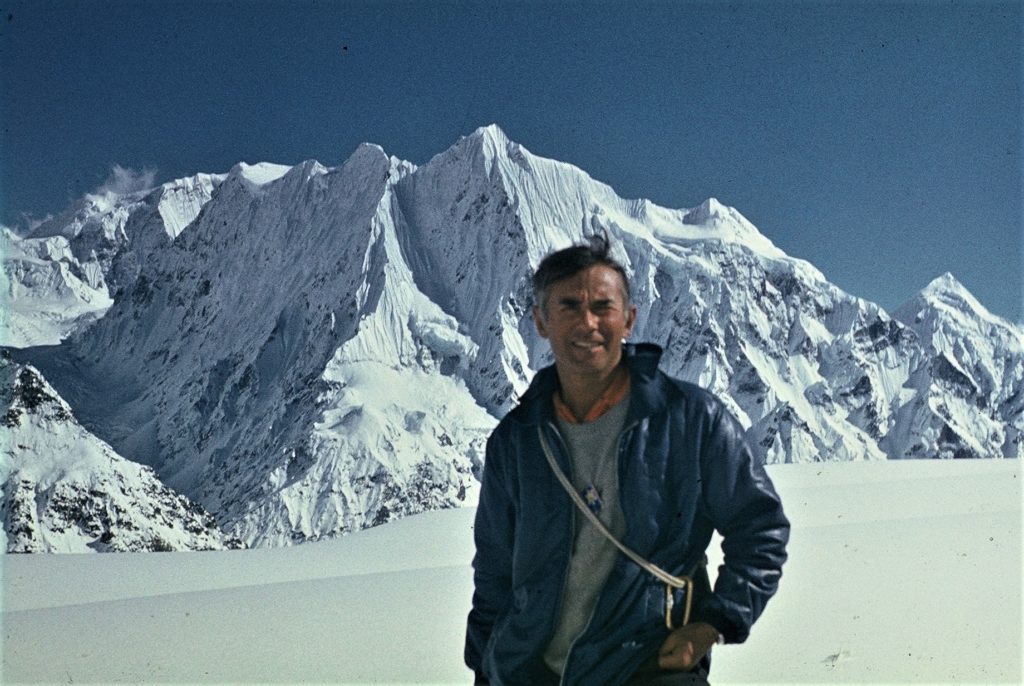 B. 15/04/1929 in Warsaw – d. 5/8/2019 in Warsaw.
An architect, writer and journalist by profession, a polar explorer, a speleologist, mountaineer, researcher, explorer, a writer and journalist by passion.
As a 15-year-old scout of the Gray Ranks, he joined under the pseudonym “Rosomak” to the Warsaw Uprising in the Śródmieście district. After the collapse of the Uprising and the banishment of the capital’s inhabitants from the city, he relocated to Kraków, where he graduated from high school and the Faculty of Architecture at the Cracow Polytechnic University. From the 1960s he lived again in Warsaw.

1949 Co-organized the Mountaineering Club reactivated after the WWII and co-founded its Tatra Cave Commission.

1950. He co-founded the Kraków Speleologist Club – the first group in Poland to use mountain-climbing and diving methods to explore caves.
He participated, among others in the exploration of the Tatra caves: Miętusia, Zimna, Kasprowa Niżna, and Chochołowska Szczelina.

1956. Co-organizer and participant of the reconnaissance expedition of the Polish Academy of Sciences to Spitsbergen.

1957. Organizational and technical manager and participant of the Polish International Expedition of the Geophysical Year to Spitsbergen.

1958 Head of the expedition of the Polish Mountaineering Association to Cuba’s caves, where he participated in the discovery and exploration of several unknown caves.

1958-1965 He led exploration expeditions to the caves of Poland, Czechoslovakia, Hungary, and Bulgaria.

1963-64-65,1967,1970,1971 Organizational and technical manager and participant in a series of paleontological expeditions of the Polish Academy of Sciences in the Gobi Desert in Mongolia. Discovery the skeletons of unknown species of dinosaurs and primitive mammals dated millions of years ago.

1966 Head of the expedition of the Polish Mountaineering Association. Achieved the fourth descent to the bottom of then the deepest known cave in the world Gouffre Berger (-1424m) in France.

1969. Led the expedition of the Polish Mountaineering Association to the deepest cave in South America – San Agostin in Mexico and the exploration of several dozen virgin Lakandons caves in the jungle of Mexico, during 120 km march through the cloud forest to the holy Mayan lake – Miramar
1972. Head of a high-mountain expedition of the Polish Mountaineering Association in Andes, Chile and Perú, incl. participated in the first ascent to the virgin peak of Cerro Sólo (6120 m) and in the first
exploration of Perύ’s deepest cave – Racasmarca.

1973. Participant of the “Glacier Pollution Study” expedition of the US Environmental Protection Agency and the Polish Central Laboratory for Radiological Protection in the Himalayas of Nepal – on the Langtang glaciers

1974. Organizational manager and participant of the geophysical expedition of the Polish Academy of Sciences to Spitsbergen

1975. Participant of the “Glacier Pollution Study” expedition of the USA Environmental Protection Agency and the Polish Central Laboratory for Radiological Protection into the equatorial glacier mountains of the Ruwenzori range – the legendary Moon Mountains, at the source of the Nile in Uganda.

1976. Head of the speleological expedition of the Polish Mountaineering Association and Sociedad Venezolana de Espeleologia on the pristine Sarisarinama plateau in the Orinoco river basin in Venezuela. Participant of the speleological “discovery of the century” – exploration of an unknown kind of cave in quartzite rocks. Managed the pontoon expedition, which, flowing in the jungle upstream of the Caura river- tributary of the Orinoco, reached its waterfalls

1977. Participant of the “Glacier Pollution Study” expedition of the US Environmental Protection Agency and the Polish Central Laboratory for Radiological Protection on the glaciers of Mount McKinley (presently: Denali) in Alaska.

1980. Managed the speleological expedition of the Polish Mountaineering Association, which was the second to reach a record-breaking depth of -640 m in America’s deepest cave – Sótano de San Agostin

1982. Participated in the Finnish ecological research of the subpolar lakes of Lapland in Finland

1982. Invited and accepted to the Explorers Club (headquarters in New York).
1983. Participated in the nature and film yacht expedition to the Åland Islands in the Baltic
1985. He received the title of Honorary Member of the Polish Mountaineering Association
1992. Interpreted the meaning of the inscription on the Disk of Phaistos from Crete (around 1600 BC). Published his hypothesis in a book entitled “Atlantis Disk.”
1993. Co-founder of the Polish Branch of the Explorers Club and served as its president for a decade
1998-2004 As a lecturer led the expeditions for tourists to Peru, Mexico, Belize, Guatemala, and Honduras.
For three decades he studied pre-Columbian cultures and shamanism in Mexico and Central America. Came to the sensational hypothesis about the biological and transcendental knowledge of ancient Mexicans and the sources of its origin (he included it in the books “Worshipers of the snake” and “Year 838, in which the Mistekas Indians (not Mystics) discovered the genetic code”).

Author of novels and short stories:

In addition, he is the author of press articles, expedition reports, film scripts, radio plays, director and cinematographer of seven documentary films about research expeditions, co-creator of several television programs (including the Transantarctica series about Marek Kamiński’s expedition to the South Pole).
Polish editions of books by Maciej Kuczyński have achieved circulation of about 1.6 million copies. He received the 1976 Scout Literary Award and the UNESCO IBBY Literary Award 1980 (International Board on Books for Young People).