An exhibition at the University of Warsaw organized by the Polish Chapter of the Explorers Club. 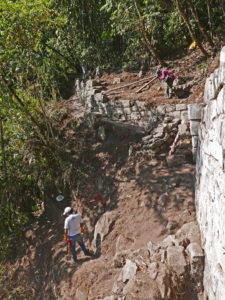 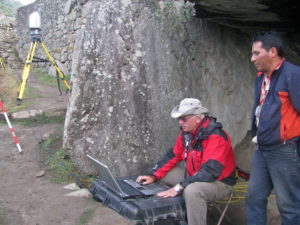 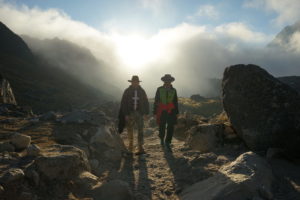 The research presented at the exhibition was carried out as part of a long-term cooperation program, initiated in 2008, between the University of Warsaw’s Pre-Columbian Research Center and the Andean Research Center of the University of Warsaw in Cusco, and Peruvian partner Dirección Desconcertada de Cultura-Cusco, and the Parque Arquelógico Nacional de Machu Picchu [Machu Picchu National Archaeological Park]. A group of Polish experts led by prof. Jacek Kościuk from the Scanning and 3D Modeling Laboratory at the Faculty of Architecture of the Wrocław University of Technology, as well as an Italian research group headed by prof. Nicola Masini, head of IBAM – CNR – ITACA (Italian scientific mission dealing with heritage protection and archeology). As part of the project, cooperation was also established with other experts: Dr. Adine Gavazzi, an architect from the University of Genoa and prof. Giuseppe Orefici, expert in rock art and director of the Italian Centro Italiano Studi e Ricerche Archeologiche Precolombiane (CISRAP). Laboratory (biochemical) analyzes were performed at the Center for Biological and Chemical Sciences of the University of Warsaw headed by prof. Ewe Bulska, Ph.D. Materials science was done at the Chemical Analysis Laboratory of the Ministry of Culture of Peru in Cusco. Radiocarbon dating was done by Waikato Radiocarbon Dating Laboratory (New Zealand) headed by prof. Alan Hogg and their final calibration and interpretation was elaborated by prof. Andrzej Rakowski and Jacek Pawlyta, Ph.D. from the Radioisotope Applications Department of the Institute of Physics of the Silesian University of Technology in Gliwice.

Logistic support, participation of Peruvian specialists and technical employees as well as ongoing documentation of field work was provided and financed by Dirección Desconcertada de Cultura-Cusco through the Machu Picchu Archaeological Park.

The work and analysis of the Polish team and foreign specialists were financed under the projects “The function of satellite positions in the vicinity of Machu Picchu: Inkaraqay, Chachabamba positions and high mountain lakes near Nevado Salcantay (Peru)” NCN OPUS grant No. 2015/19 / B / HS3 / 03557 directed by prof. Mariusz Ziółkowski and “Armakuna: ritual functions of the Inca baths” on the example of the Chachabamba ceremonial complex (Historical Sanctuary of Machu Picchu, Peru)”, NCN Preludium grant No. 2015/19 / N / HS3 / 03626 headed by Dominika Sieczkowska, M.A. Consiglio Nazionale delle Ricerche (CNR) and the Italian Ministry of Foreign Affairs made a significant contribution to the financing of the team of Italian remote sensing experts. The researchers also benefited from the infrastructure and logistical support of the Andean Research Center of the University of Warsaw in Cusco (CEAC), financed under the SPUB grant of the Ministry of Science and Higher Education.

Main assumptions and goals of the work

The goal set at this stage of work was to obtain data on the relationship between the center, or “city” (Llaqta) of Machu Picchu and the network of the remaining 60 stations. Three very different regions (and positions located on them) were selected for detailed research: Mirador de Inkaraqay located in the immediate vicinity of Llaqta, on the northern slopes of Huayna Picchu, Chachabamba (and neighboring Choquesuysuy) located 7 km from Llaqta on the shores of Vilcanota / Urubamba river and the farthest, located about several dozen kilometers from Llaqta around high-mountain lakes at the foot of Nevado Salcantay. Great importance was also attached to the issue of dating the studied positions in order to answer the main question: what was the time relation of the creation of Llaqta Machu Picchu and those positions which we define as satellite in relation to it? Was Llaqta created as the first or its construction was the culmination of the previously initiated Inca process of urbanization of this part of the Vilcanota / Urubamba valley? A separate goal, especially important for our Peruvian partners, was to draw up conservation recommendations regarding the archaeological sites studied.

In addition to traditional excavations carried out as part of the two-year research programs approved by the Dirección Desconcentrada de Cultura-Cusco, for which the Polish side presented their specific proposals, it was possible to widely apply non-invasive research techniques, primarily GPR (so-called georadar) and LiDar, i.e. a scanner located on drone for recognizing the terrain and structures covered with dense vegetation as well as analyzing satellite images. Documentation of the examined positions was made using 3D laser scanning technique as well as ground and air photogrammetry. In the study of the lakes, a fishfinder and side sonar were used, as well as an underwater view made by archaeologists-divers. Due to the very high altitudes at which these reservoirs are located (4,200 – 4,500 m, e.g.), this part of the works, absolutely pioneering in this area, had to be particularly well prepared and controlled.

The most important results and further research perspectives

The following charts and the film present research procedures and their results in particular thematic groups. At this point, it is important to note the importance of radiocarbon dating obtained as a result of the Project, which significantly changes the current chronology of the creation of Llaqta Machu Picchu and several of its satellite positions. It seems that Llaqta and Chachabamba began to be built in the first half of the 15th century and not after 1450, as previously thought. However, probably even earlier, at the turn of the fourteenth and fifteenth centuries, the construction of the site of Choquesuysuy neighboring with Chachabamba in the Vilcanota valley began. These results are so encouraging that a joint decision was made, with Peruvian and New Zealand partners, to prepare a comprehensive radiocarbon dating program for several positions from the Park.

Excavation work will not cease: as part of the contract extended for the next years with the Dirección Desconcentrada de Cultura, we were offered to study at the little-known Qantupata ceremonial site, which is located in a very hard-to-reach area, covered with tropical forests. It was already carried out in 2019 by D. Sieczkowska, M.A. for initial recognition of the position and the commencement of regular research is planned after the end of the rainy season, in the second quarter of 2020.

(translated from Polish by Andrew A. Piętowski)